The moon for the blessed month of Ramadan has been sighted in Pakistan, tezkhabar news reported Tuesday, citing an official announcement by the Ruet-e-Hilal Committee. The first of Ramadan will begin on Wednesday, April 14, 2021.

A meeting of the Ruet-e-Hilal Committee was held today (Tuesday) in Peshawar to sight the crescent moon for the holy month. The meeting was held in the city after 17 years.

Pakistan Space and Upper Atmosphere Research Commission (SUPARCO), the Pakistan Meteorological Department (PMD), and the Ministry of Science and Technology were also part of the meeting.

Meanwhile, zonal committees from other cities also joined the meeting virtually.  Moon was sighted in various cities of Pakistan, including Hyderabad, Karachi, and Islamabad.

Chairman of Ruet-e-Hilal Committee, Maulana Abdul Khabir Azad, had earlier said that people will observe the first fast (Roza) and Eid on the same day across the country.

The cleric had further said that all the Ulema, including Mufti Shahabuddin Popalzai, have created an atmosphere of brotherhood within the committee.

The Meteorological Department had said that the moon of Ramadan begun to take shape at 7:32am on Monday, adding that after sunset on Tuesday, when it becomes visible, it will be over 35 hours old.

The weather department had indicated a clear possibility of a moon sighting today.

This was the first Ramadan moon sighting under Maulana Azad, who was appointed by the federal government in December last year, replacing Mufti Muneeb-ur-Rehman. 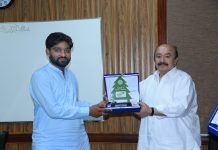 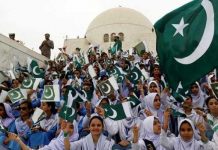