ISLAMABAD: Chief Justice of Pakistan Umar Ata Bandial Saturday said that the no-trust motion is a political matter and the constitutional process should be followed in this regard.

The CJP’s remarks came during the urgent hearing of the Supreme Court Bar Association (SCBA) petition seeking the apex court’s order against the public gatherings in the federal capital ahead of voting on the no-trust motion against Prime Minister Imran Khan.

Earlier, the SC had fixed March 21st as the date to hear the petition but the case was fixed for today after an attack on the Sindh House by the PTI workers on Friday.

At the outset of today’s hearing, the CJP said, “We will also direct the Opposition parties to abide by the law.” He remarked that the court will ensure the protection of the national institutions.

The CJP asked the attorney general if he wants the court’s opinion about Article 63-A? He directed him to file the reference so that the bench could hear it along with the petition.

At this, the attorney general said the political process should be followed according to the Constitution and nobody should adopt the path of violence. He requested the court to hear the presidential reference apart from the case as it is not related to the SCBA case.

“We respect the Parliament and the parliamentarians,” the CJP said, adding that no party will be allowed to use the court’s platform to worsen the ongoing political situation in the country.

“The court will answer legal questions according to the Constitution,” he added.

Referring to the attack on the Sindh House, the CJP observed that the property of the federal unit was damaged.

During the proceedings, Justice Munib Akhtar stated that the court’s intervention will not be meant for paralyzing the political process, adding that they will implement the Constitution for discipline.

As per Article 95 of the Constitution, the speaker will have to conduct a debate on the no-trust motion in the National Assembly ahead of voting on it, stated the judge.

Meanwhile, the apex court issued notices to the ruling PTI, PPP, PML-N and JUI-F in this regard and adjourned the hearing till Monday 1pm.

PM asked to stop PTI workers from resorting to violence

Referring to the attack on the Sindh House, the attorney general suggested the prime minister to direct the party workers as PTI chairman that these types of incidents should not be repeated in future.

On the occasion, the prime minister directed that the court orders should be implemented in letter and spirit.

In its petition, the SCBA said that all the parties must be restrained from acting against the Constitution of the country.

It said that both sides had expressed their intentions to gather, and protest at a mass scale in Islamabad in the wake of the vote of no-confidence against the premier and feared that the gatherings may turn violent. 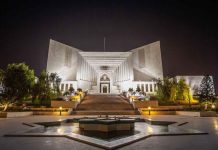